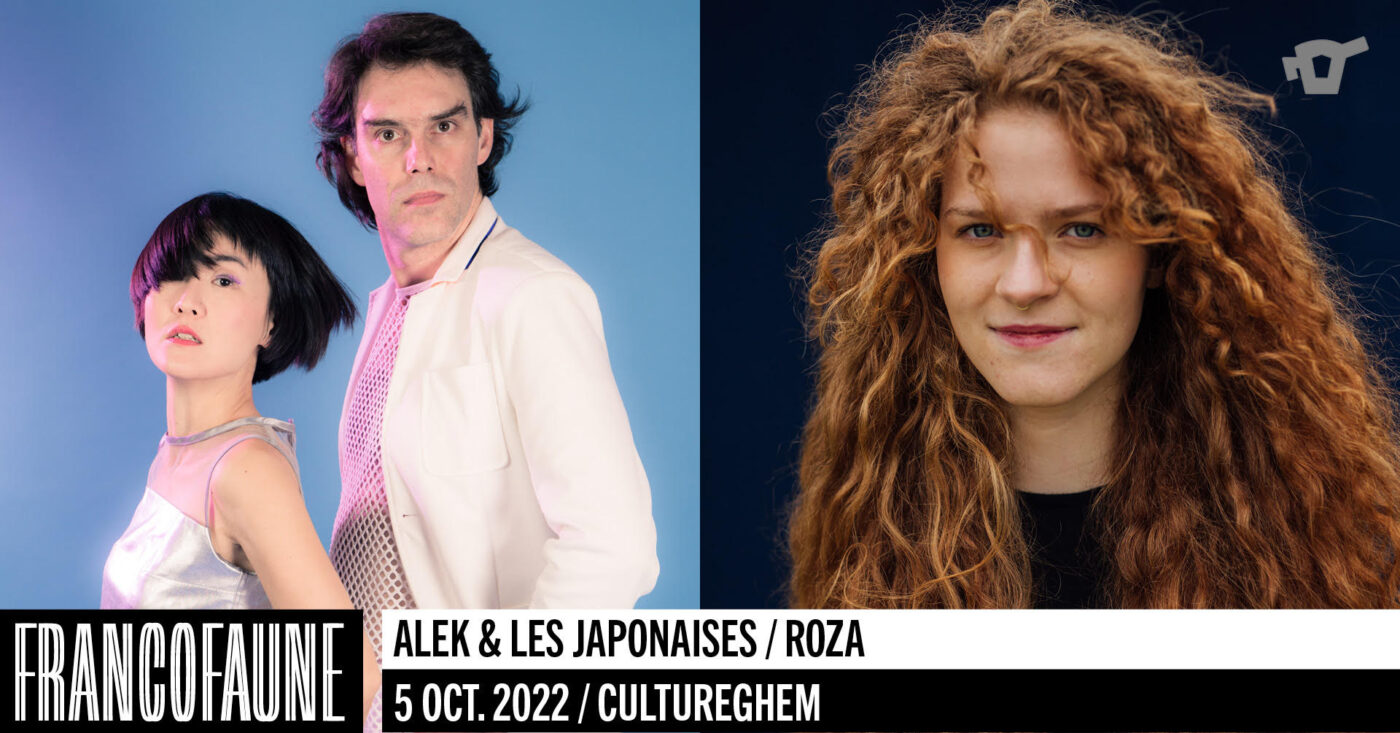 19:30 Roza
French song to slide between Camille and Pomme, Roza’s universe emerges at the junction of electronic sounds and acoustic instruments. With grace and simplicity. Always ready to take on a challenge, she went on a solo tour of Belgium and France in a solar-powered cart: 1250 km in the legs. At FrancoFaune, she will present her first solo album, produced with the help of Antoine Flipo (Glass Museum).

20:30 Alek et les Japonaises
Alek et les Japonaises is 4 words, one of which is feminine plural. It is also a Belgian-Japanese duo of electrical music quite singular. They exist thanks to a contest that they did not win. And thanks to paid concerts. Like fusion cooking and aquagym, it’s not too boring. The audience usually leaves the concerts smiling. At Cultureghem, FrancoFaune will give them carte blanche to wildly reclaim this unusual venue.

https://www.francofaune.be
With more than 50 concerts in 20 venues in Brussels and Wallonia, FrancoFaune offers a spotlight on the diversity, originality and innovation of the French-speaking scene. On the program, carte blanche to confirmed artists and highlighting of new musical species, with the French language as a common point.

A place to meet and share where everyone is welcome.

A dozen actions and events to take back the streets of Brussels.

Our actions are split into three categories →

Be part of the change

The biggest and most surprising playground
in Brussels.

Create a meeting and sharing space in your neighborhood.

Transform your
street for a day.

There's always something going on here!

At Cultureghem there are events every week. Recurring actions you can always count on and many other cool events.

A summer full of culture on Wednesday evenings!

With OMTA (Open Meeting Space for Temporary Art) Cultureghem supports art as a connecting factor in public space! From mid-June to mid-August you can join us every two weeks on Wednesday evening for a (free!) cultural activity!  Discover the full programme...
Read More

BRU'XL-ON TOUR can be compared to a traveling company that activates public spaces in Brussels, where there are many children and young people. In these spaces, we organize colorful afternoon programmes.  All the children can join in and take part in workshops...
Read More

Cultureghem festival – SAVE THE DATE

Cultureghem is celebrating its 10th anniversary this year! In 2012, the seed of our organization was sown with a mobile kitchen in the middle of a large covered market. 10 years later, we are lucky to have experimented, grown and cultivated the public space in many...
Read More

Join us and cook in the DREAMKITCHEN

Every week, from Monday to Thursday, we cook delicious vegetarian dishes with unsold vegetables from the market. We prepare vegetable burgers, falafels, couscous, bulgur and many other things. Do you want to come and discover all these recipes and learn how to make...
Read More

Winter has arrived and that means low temperatures, but not in our DREAMKITCHEN!   DREAMKITCHEN and our fantastic DREAMTEAM are eager to keep you warm with the most delicious soup and with nutritious meals for the whole of Brussels and far beyond. In these...
Read More

Want to be part of the change?

Help create another way of living together and show the way to a more human and sustainable future in the city!

Become a volunteer and put your talents to work for change and mutual aid in Brussels.

Create a meeting and sharing space in your neighborhood.

Transform
your street
for a day.

This website uses cookies to improve your experience while you navigate through the website. Out of these, the cookies that are categorized as necessary are stored on your browser as they are essential for the working of basic functionalities of the website. We also use third-party cookies that help us analyze and understand how you use this website. These cookies will be stored in your browser only with your consent. You also have the option to opt-out of these cookies. But opting out of some of these cookies may affect your browsing experience.
SAVE & ACCEPT